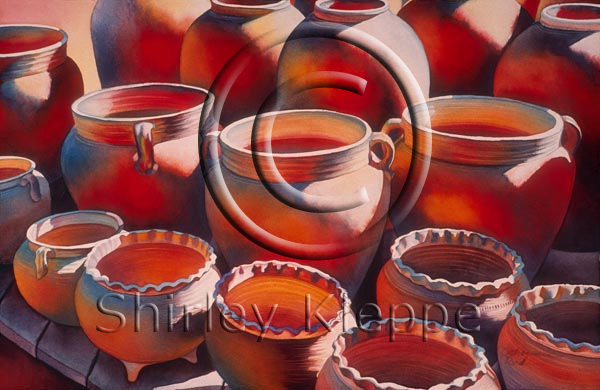 A year after painting the very successful “Pots and Jars”, I decided move into high color. I changed my signature from “Kleppe” to “Outrageous Red,” although I sometimes use “Kleppe”. I was taking a Graduate Watercolor class at Arizona State University in Tempe, Arizona. Taking the graduate class definitely pushed me through rapid advancement in developing the “Pots and Jars Series.”

This was a bold move for me that was not only fueled by the university class, but by understanding the jury selection for exhibitions. At the time, all national exhibitions were juried through slide submissions. Any slide had 2 to 3 seconds to catch the juror’s eye. I reasoned that high color would catch and hold the juror’s eye long enough to be accepted into the show.

My idea on high color was proven correct with the success rate of this new color handling. “Hot Pots” was completed in the late summer of 1989. It was painted on a stretched half sheet, 15” by 22,” of 140 lb. Arches watercolor paper with Winsor Newton transparent watercolor pigments. The first show “Hots Pots” was accepted into was “Arizona Artists Guild Fall Show,” Shemer Art Center, Phoenix, Arizona, September 12-30, 1989.

During these years in Phoenix, banks seized on the idea of giving purchase awards as a means of taking tax deductions to donate money to non-profit art groups. The paintings were then taken by the banks and placed somewhere. At the rate the banks were buying each other out, I have no doubt this painting is hanging in someone’s home, leaving through the back door with their departing files! Bank of America bought out Security Pacific. I wish I knew who had it and buy it back!