There are many answers. My interpretation for an art series is a specific succession of a same art subject being interpreted in developing and different manners. In other words, taking a primary subject, like a group of terracotta pots, and producing a number of paintings of them at different angles, colors and paint manipulations.

How Many Paintings Make a Series?

Personally, I would commit to three pieces or more. The series must be painted or produced back to back, within a time period, with a common thread. This is my personal objective and not subject to outside speculation. For instance, if an artist is know as a western artist, and they only produce different aspects of western art, then it not a series unless the subject is specific. If that same artist starts specializing in cowboy boots, then it becomes more specific.

It is also possible to have general series titles to cover more subjects. In other words, these group categories really are not true series, but a group of similar subject matter for the sake of simplicity. In my case of various series, I can have several going at the same time. 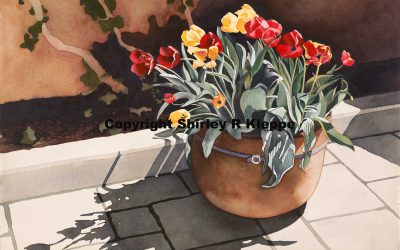 The Floral Series began as an experimental but developed into a full-blown series of work over a number of years. The floral paintings began in the early 1980’s and lasted for ten years. The paintings had indoor and outdoor settings, but it was the flowers that held...