Shadow In The Rain 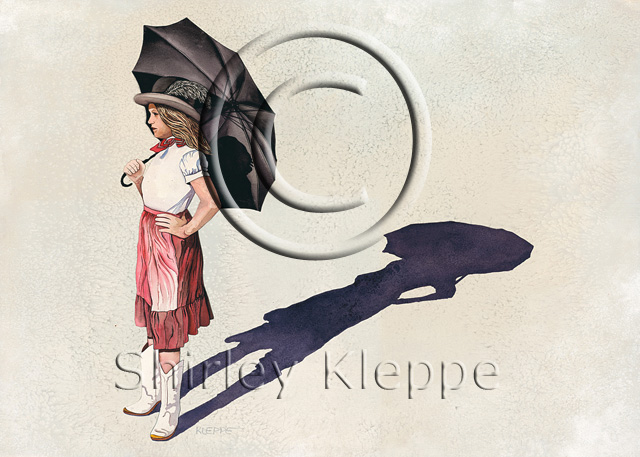 While I was teaching my private adult watercolor classes in 1984, I took many trips to visit the Scottsdale, Arizona art galleries. After one of these trips, I decided to “stage” a composition. I dressed my daughter, Nicole, in western cowboy boots, long skirt, shirt, my hat with a feather, while holding a big umbrella. I wanted a composition with just her and her shadow.

About this time it was popular among watercolorists to use kosher salt in the wash to make a speckled look. To do this, I had to paint Nicole and the umbrella on a separate sheet of paper. I cut it out, and would place it on another prepared full sheet of watercolor paper. I put a light gray wash down and sprinkled kosher salt all over on the new sheet of paper. It looked like rain drops coming down. I projected Nicole’s shadow onto the dry salt surface and painted it in. I glued the cut out figure and umbrella on top of the shadow. The idea originated with the idea of a shadow in the rain, with the play of the umbrella used to keep the rain/sunshine off her.

I used slide film to take several photos, then used a projector to sketch the image. The original image was taken with her facing to the right. Because I wanted a nice, clear image for the shadow, I had her stand on the sidewalk in front of our home. If she had faced left, then the shadow would not have been correct. Therefore, I just flipped the slide around for projection, to show her coming into the painting.

The painting was only in one show, as we were moving to Oklahoma.