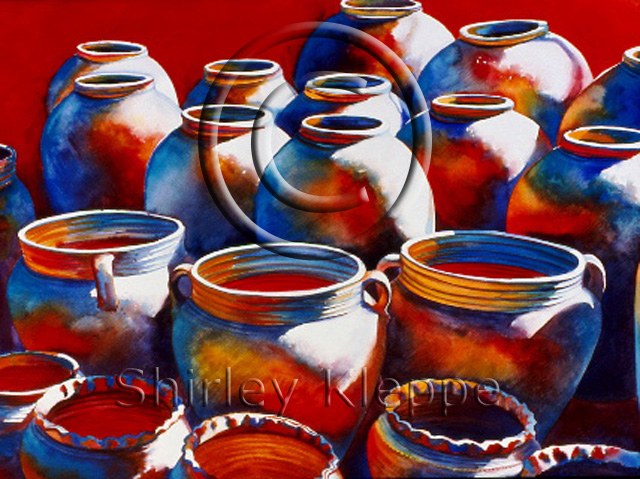 After being painted, nothing is better for a painting than a great title. Feeling like the owner of the amazing horse Secretariat, I felt this painting would be a real blockbuster. I needed a real shocker of a title, something real hardcore. Whenever I title a painting, I give it great thought. Since this painting was a breakaway from the previous beautiful brushed washes of the “Pots and Jars” series, I needed to be a different “me” to take a chance on trying to paint looser. In the real world, this was very hard for me to do.

My approach in the series is always the same: start in the upper left hand corner, work right across the top, back over to the left and across, and so on down. This time I painted with less blending.

As I painted throughout the composition, I did enjoy the looser approach with a racy, almost careless, feeling. I finished it quickly. Looking back, I do not know why I have not done this approach more often. I can only guess that letting loose means less control. I might do more painting like this in the future, maybe…

The first exhibition “Ruthless Reds, Rogue Oranges, and Virgin Whites” was shown was the “Arizona Watercolor Association’s Fall Membership Exhibition”, at the Kessel-Long Gallery, Scottsdale, Arizona, October 11-18, 1990, Juror, Polly Hammett. The painting was given the “Award of Excellence.”

The next show was “The 16th Annual Exhibition of the Western Federation of Watercolor Societies,” at the Art Center of Corpus Christi, Texas, June 1-30, 1991, Juror of Selection and Awards, Virginia Cobb.

Later that year is was shown at “The Western Colorado Watercolor Society Annual National Exhibition,” at the Western Colorado Center for the Arts, Grand Junction, Colorado, October 1-29, 1992, Juror of Selection and Awards, Nita Leland. It was awarded, “The Past President’s Award.”