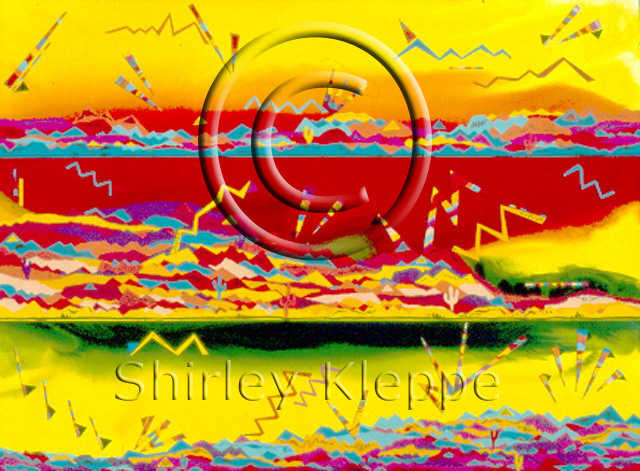 The year is 1989, and I was getting into every show! My work was hot and it was showing. I was back in Arizona and looking to experiment. Collages have always been a winner with jurors, so I decided to try it. I had watched several watercolor ideas on pouring watercolors onto the paper and let the pigments move around. I did a few colors with a lot of pigment in squeeze bottles on wet and dry paper to get the feel of what was happening. I started with the base painting being poured watercolor pigment. I added cutout colored paper to make the designs on top. I used glue to put it all together to stick. My theme was: what was it like here in Arizona before any humans were here? I wanted to represent the basic senses of hearing, seeing, and feeling with the elements fire, earth, air, and water. I combined these into three parts of morning, noon, and night. It was so much fun and successful that I did a whole series of these collages. I named the collage after the primary senses and colors.

The first show “Primary” was exhibited was “The Arizona Aqueous IV ’89,” at the Tubac Center For The Arts, Tubac, Arizona, March 18-April 16, 1989, Juror of Selection, Christopher Schink; Juror of Awards, Edward Reep.

Next was “The Arizona Watercolor Association Spring Show,” held at the Sedona Arts Center, Sedona, Arizona, May 1-20, 1990, Juror, Jeanne Dobie.