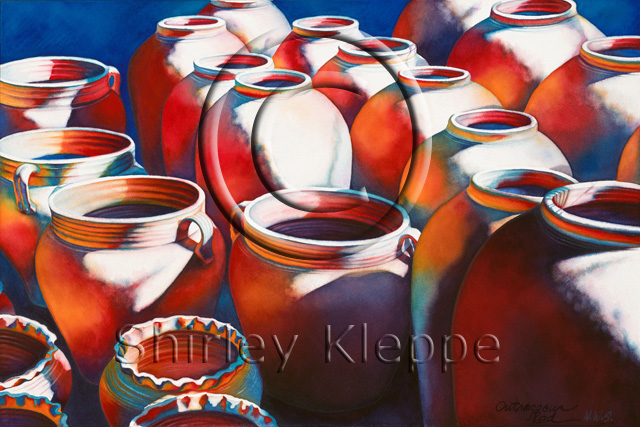 “Jewels” had a long and successful showing in exhibitions. It is the 8th painting in the “Pots and Jars Series”, and completed April 3, 1992 on a half sheet of watercolor paper, 15” by 22”. It was completed after the most successful “Breathless Reds”. Since it was a half sheet, it was easier to finish. Its theme was red, white, and blue, with the background being Winsor Blue. I kept with the delicate brush strokes in high color. I love the painting, and it shows. It never won an award, but it should have!

The list of “Jewels’” shows is longer than its story! The first show was “The Kentucky Watercolor Society 15th National Exhibition, Aqueous ’92,” at the Louisville Visual Art Center Association at Oxmoor Center, Louisville, Kentucky, September 4-13, 1992, Juror of Selection and Awards, Jim Cantrell.