In Defense of the Common Man, Kaiser’s Ice Cream Store, 1986 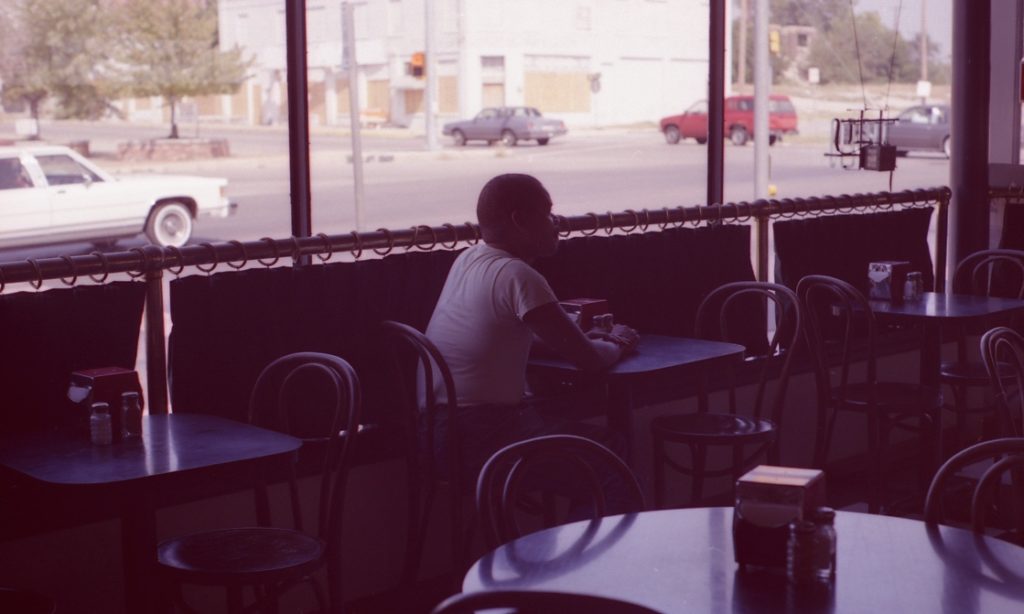 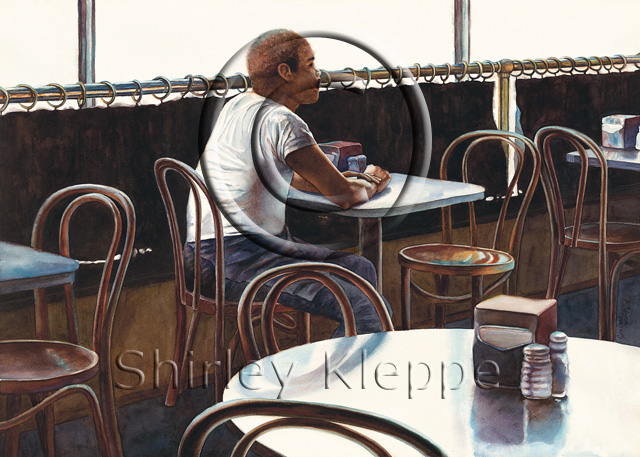 This painting is a study in duality. The demise of mom and pop businesses and the common man. This painting takes place in Kaiser’s Ice Cream Store in September of 1986. When we lived in Edmond, Oklahoma from 1985-1987 with Sonic Corporate, we took many rides around town to see the sights. This is a left over from my earlier childhood days of driving around town on the weekends in Sedalia, Missouri. One of our favorite places to visit was the old fashioned ice cream parlor in downtown Oklahoma City. I was especially taken by its vintage appeal of the black and white checked floors, bent wood chairs, and black velvet curtains on brass rings and railing. After a year of just looking at this great interior, I decided to photograph it with a short roll of film with only twelve shots. The day I was there, a nice day counter man was working and asked to help me. I asked if he had the time to pose for me. I was impressed with his calmness and politeness. Since I was shooting film, I had no idea what was ‘in the can!’ afterwards. I returned later to find that the business had closed and everyone was gone. I was probably the last one to photograph Kaiser’s and the short window into its history.

Several years went by, not thinking about Kaiser’s or the ‘Common Man’, until I bought Aaron Copeland’s album, “The Copeland Collection.” The first piece was, “Fanfare for the Common Man.” The impressive gongs, brass, and elegant understatement of the music gave new meaning for me to paint, “In Defense of Common Man”. Common man is symbolic of all of us who are nameless, doing our best in a quiet, patiently driving reserve. Here’s to us and all who have gone before!

“In Defense of the Common Man” was finished on April 7, 1991. The first show it was accepted into was the “Arizona artists Guild Spring Membership Juried Exhibition” at the Shemer Art Center, Phoenix, Arizona, May 28-June 22, 1991.

The next exhibition was “The Arizona Watercolor Association 1991 Fall Membership Show”, Arizona Artists Alliance, November 2-16, 1991. It received the Award of Excellence.