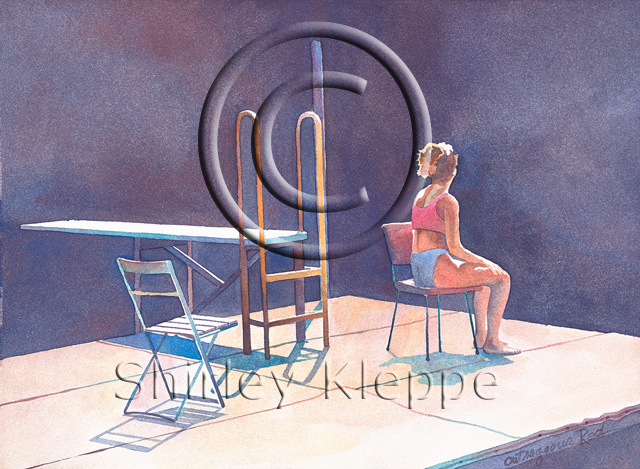 We love living at the Lake of the Ozarks. When we lived in Oklahoma, we drove there as often as we could. One of our favorite places to visit on the lake is Ha Ha Tonka State Park. Just Google it! It is up the Big Niangua River that feeds the lake river system. One day our family was on our way to Ha Ha Tonka for a swim and picnic. Our son and daughter wanted to try out the new ‘Jet Skis’ at the Highway 54, Camdenton Bridge. The really old resort there had cabins with sandstone facings. The big dock was old and rusted run down, but they rented jet skis! Now, these watercraft were first generation personal watercraft or now known as PWC’s. They were difficult to try to get on them without sliding off, and even more treacherous to try to stay upright to ride the beast! We only rented one jet ski, so everyone had to take turns for their ride. During a time out, I asked my daughter to pose for me on the dock. I moved around, and repositioned her and a chair left there. I took several photos, and chose one to paint. The composition is soft and flat, and not quite right. I love the memory.

The painting was only in one show, “The Arizona Aqueous IV, ’90,” at the Tubac Center For The Arts, Tubac, Arizona, March 17-April 4, 1990, Juror of Selection, Fran Larson; Juror of Awards, Serge Hollerback. This painting was selected for the Traveling Show 1990-1991.