Are You Ready For a Real Cheeseburger? Sedalia, Missouri 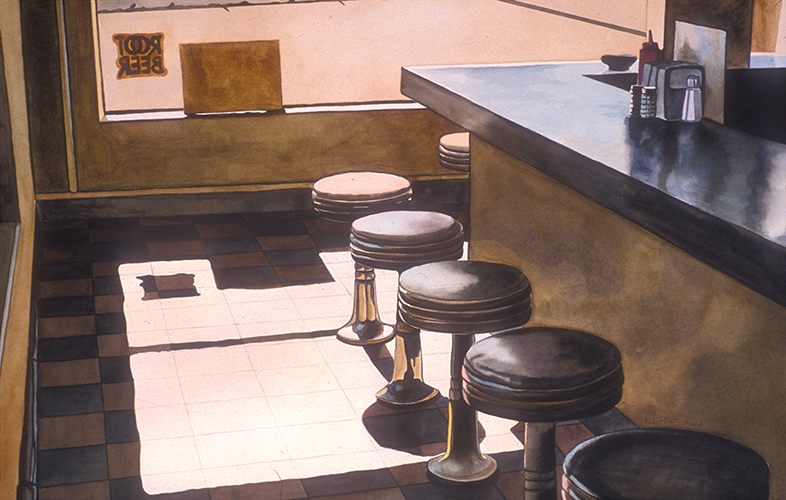 This story really is not about the painting, but the wonderful legacy a family gave to Sedalia’s identity. Way back in the ‘Great Depression,’ not unlike today’s ‘Modern Depression,’ families had been working and struggling to survive. This unique story dovetails with my own family in the same time and people interaction. It also carries forward with my own family hamburger business, Sonic Drive-In.

In 1932, Jesse D. Garst died in Sedalia, at the age of 50. My Grandfather Benjamin Roy Klein died in 1939 at 614 S. Ohio at the age of 60. Times in Sedalia were very tough. Men with no jobs depended on their women and families to make the money. These women were pioneer girls, learning how to cook, clean, and sew from an early age. Jesse Garst married Fannie Winstead and Benjamin Roy Klein married Mora Williams. Both women were self-sufficient, and most probably friends living only two blocks apart. Mora Klein owned and operated the ‘Klein Helpie Selfie Laundry’ out of the basement of 614 South Ohio.

After Jesse died, Fannie went to Illinois to help run her sisters’ root beer stand, cooking and baking pies for the patrons. They served steak burgers, soft drinks, and malts to the delight of everyone. The drive-in service was unique and cutting edge for this hip age. Although the Winstead family had originally lived in Smithton, as did Benjamin Roy Klein, Fannie wanted to return to Missouri. They decide to come Sedalia and purchase a prime block in Sedalia at the southwest corner of Broadway and Ohio Streets. In the summer of 1940, my father, Benjamin Eads Klein, and his sister, Joyce, applied for a job at the new drive-in just two blocks from their apartment. No doubt, Grandma Klein was very protective of where her children worked and watch over. She must have been reassured by Fannie’s leadership. I have no idea how long my father and aunt worked there, but they had a great time. 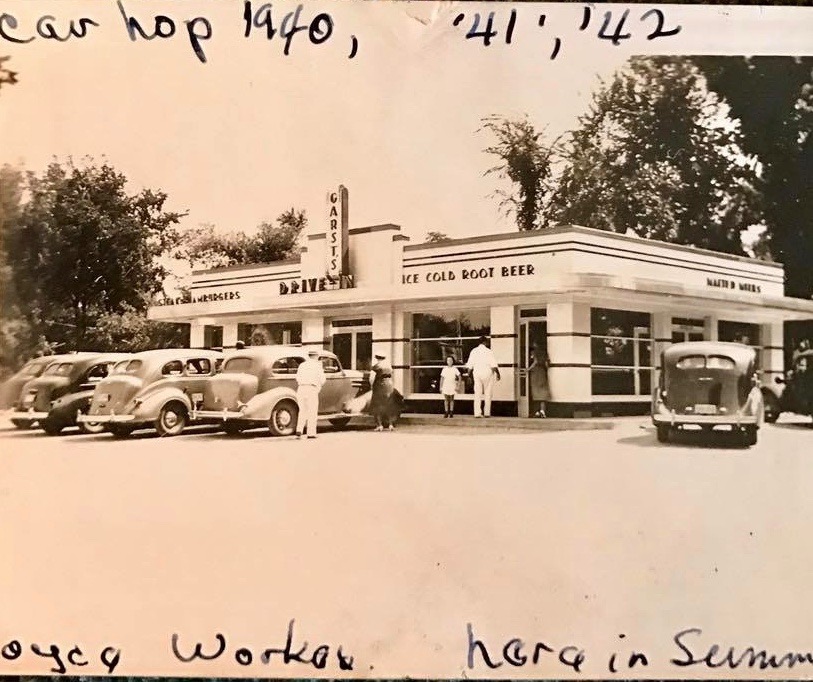 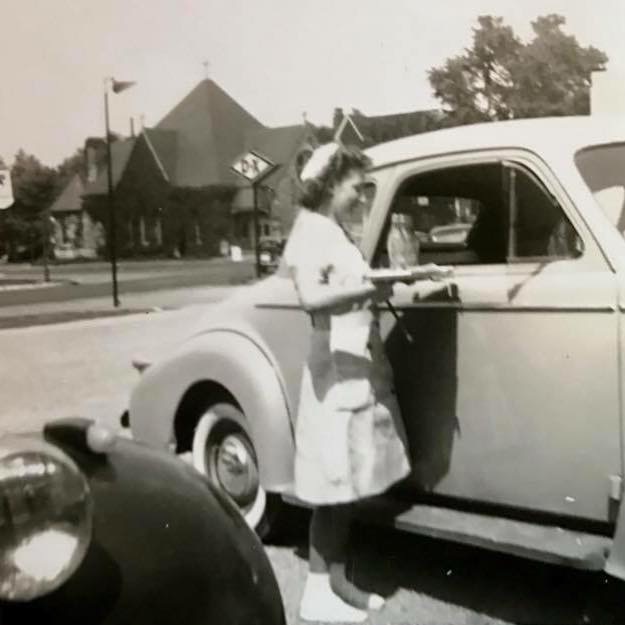 Fast forward, Fannie past away on 1947, so her daughters, son and a long time employee decided to run the restaurant. Three families were supported by the drive-in that was open early and late with three shifts. Eddie Boydel, bought the drive-in and ran it until his death in 1989. George Goetz, who worked there as a teenager, was the manager. He tried closing the place, citing low customers and retirement. That totally backfired, as everyone called and flocked to the drive-in in total remorse! How could you do this, George??!! George had the drive-in open and flipping burgers! Go George.

Donnie and Rebecca Garst shortly before the drive in closed. 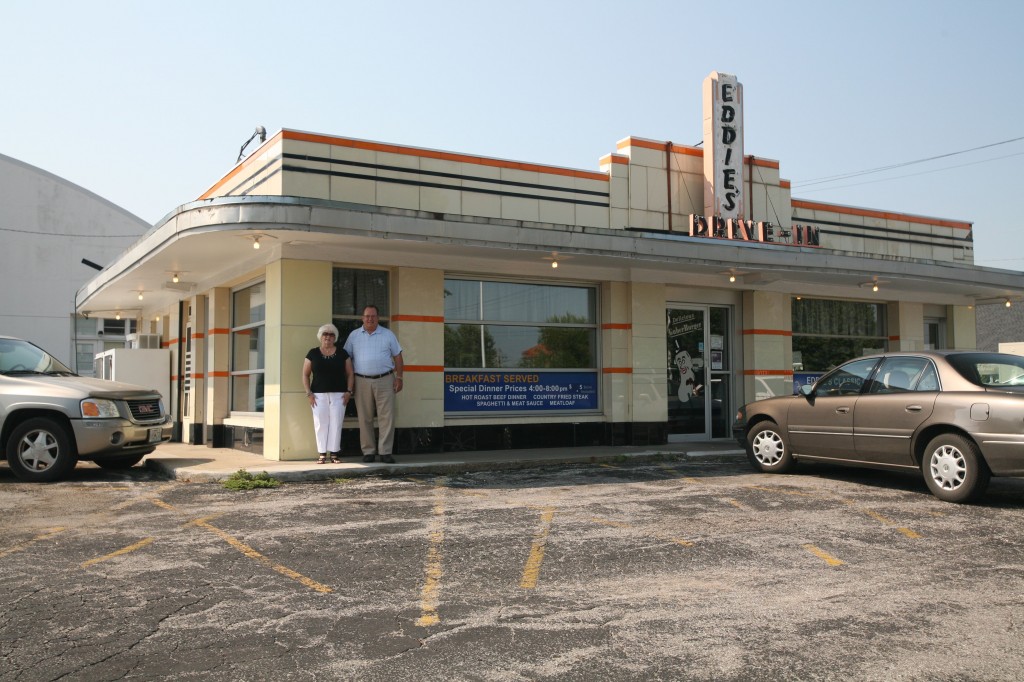 Just a brief bio of my painting, “Eddie’s” (just in case you’re interested)! While I was taking photos of the family apartments, I took photos of Eddie’s Drive-in before they took out the old counter service and stools. I had lived during all my years in Sedalia at the drive-in, waiting in line in front of the grill, wanting the best made-to-order burger in the whole world! This was before BS (before Sonic!) and I remember my dad and aunt. I loved their burger experiences. There was nothing like it anywhere, even today. It eventually closed and sold. An Urgent Care building was erected on the same location. 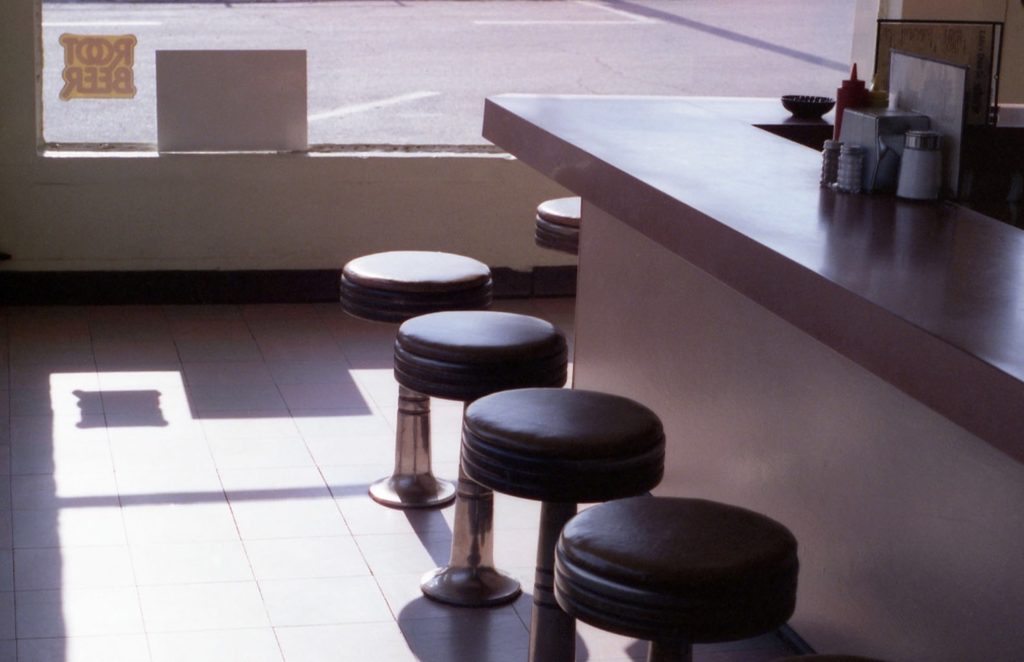 The next show was “The Arizona Aqueous 1988” Tubac Center for the Arts, Tubac, Arizona, March 19-April 17, 1988. Juror of Selection: Serge Hollerbeck, Juror of Awards: Peter Bermingham.

The painting’s final show was “The Arizona Watercolor Association Spring Show” The Shemer Art Center, Phoenix, Arizona, May 1-21, 1988. Juror: Gerald Brommer. The painting was unfortunately sold and left the state. Wish I knew who had it now.